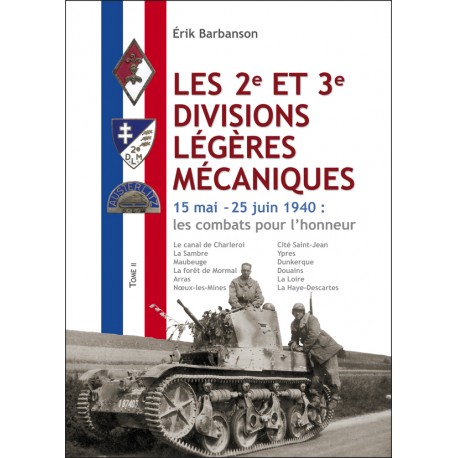 Second part of the history of the 2nd and 3rd Light Mechanical Divisions that constituted the cavalry corps of General Prioux, from May 15 to June 25, 1940.

The first volume devoted to the 2nd and 3rd Light Mechanical Divisions, made it possible to follow their engagement in the cavalry corps of General Prioux, during the first tank battle in history which mainly opposed them to the 3. and 4. Panzer-Divisionen of General Hoepner. More than 1,300 armoured vehicles (tanks and armoured cars), one sixth of the armoured forces of two belligerents, clashed. The losses were heavy on both sides, but the two DMMs allowed the installation of the infantry of the First Army in the gap of Gembloux. This second opus begins on May 15th. The potential of the 2nd and 3rd DLM remains significant with 395 armored vehicles out of 575, but about 80 vehicles are temporarily unavailable. They hoped to be able to reconstitute themselves behind the line held by the infantry, but the Germans had broken through the Allied front in the Ardennes and were advancing rapidly. The 2nd and 3rd DLM will then continue to fight almost permanently and until the armistice, standing up to the opponent in many heroic actions. Among these commitments, let us mention in May the cleaning of the forest of Mormal (29th Dragons), the Franco-English offensive from Arras (3rd DLM), the defense of Nœux-les-Mines (12th cuirassiers and tanks of the 3rd DLM), the assault on the Cité Saint-Jean (11th RDP) or the defense of Ypres (2nd DLM). The chapter on the evacuation of Dunkirk will allow you to discover a large number of unpublished French photos to date. In June, the reconstituted 2nd and 3rd DLM continue the fight with about fifty armored vehicles, as in Douains, near Vernon or Descartes on June 22, the day of the signing of the armistice with Germany. The result of more than 15 years of research, this book ends with a few reports from officers on the lessons to be learned from this campaign, not to mention an unprecedented summary of the markings and registrations found to date for the armored vehicles of these two divisions.